Fort Sinquefield is an historic site on the National Register of Historic Places. Located near present-day Grove Hill, Alabama, it is situated in the fork of the Tombigbee and Alabama Rivers, territory that was originally home to the Creek Indian tribe.

The fort was built in 1813 by settlers who had come to the Mississippi Territory seeking land. As they created homesteads in the Creek tribe’s territory, tensions gradually increased and ultimately erupted in war between the Creeks and the settlers at the same time as the United States War of 1812. The fort was the site of a tragic battle in September of 1813.

Managed by the Clarke County Historical Society, interpretive signs on site tell the story of the battle and place it in the context of the larger Creek War of 1813-1814 and the War of 1812.

A replica of the corner of the old fort wall marks the place thought to be the original fort location. Visitors are welcome to take a self-guided tour at any time of year and can walk from the fort site to the spring that was part of the events that unfolded at the battle.

The existing written accounts of the battle were all authored by settlers, thus the story has not been well documented from the native tribal perspective. In 2013, descendants of both settler families and native tribe members who fought in the 1813 battle came together to share what they had learned from their respective elder generations about the battle. INFORMATION AND PERSPECTIVES FROM THE 2013 DESCENDANTS GATHERING WILL BE ADDED TO THIS SITE SOON. STAY TUNED.

A pivotal moment in the battle is depicted in the signage at the site.

While the battle at Fort Mims was the most famous, Fort Sinquefield was one of a number of settler forts in the region. 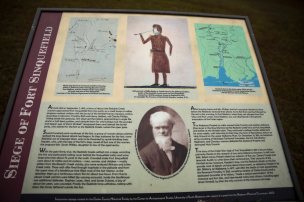 Interpretative signs tell the story of the battle.

A gentle, easily walkable trail is maintained to the creek where some of the events on the battle unfolded.

To visit the fort site, travel east from Grove Hill, Alabama, on Highway 84. Near the community of Whatley, a sign on Highway 84 marks Fort Sinquefield Road, on which the site is located. [Click to see location on Google Maps.]